A modern farce, by Paul Rudnick, on Broadway in the early 90's, about a TV star, Andrew Rally, who has been cast to play Hamlet in NYC's Shakespeare-in-the-Park but doesn't want to do it. Upon uttering, "I Hate Hamlet," he is visited by the ghost of John Barrymore whose sole mission is to get him to play Hamlet. Hilarity ensues as we meet Andrew's real estate agent, two theatrical agents competing for Andrew, Andrew's girlfriend and Barrymore's former lover as they push and pull Andrew in many directions simultaneously. 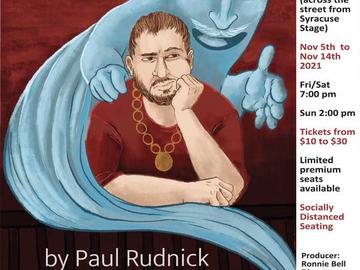 Audience members must be vaccinated and wear a mask during the show. Please bring proof of vaccination with you. Further updates will be available as released.