We will perform an "originalist" version of Julius Caesar where the men are in Roman togas and soldier's uniforms and the only two women in the show, Calpurnia and Portia, are in traditional Elizabethan garb- typical of Shakespeare's day because of the speed in which they had to mount their shows, the prohibitions on certain types of clothing for certain people based on the Sumptuary Laws and the cost of producing all new costumes for every show when they had a stock of costumes on hand from previous shows.

How do we choose leaders in a democracy?  What forces of greed, ambition and pride determine the outcome of a decision to keep or depose a ruler?  The 2017 version of this play in NYC's Central Park depicted Julius Caesar as a Donald Trump down to the red tie and the orange hair and skin.  What are the decisions that influence people to take action?  How can people be manipulated by speech and actions?

Don't miss the opening play of our 16th season... 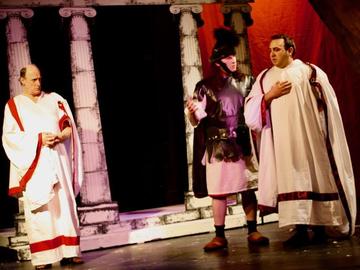 Please bring a lawn chair or a blanket to sit.  All food and drink is welcome.  The concession stand run by the Thornden Park Bulldogs will be open for all shows except June 1, 2018.  SSITP will sell merchandise and Gannon's ice cream at intermission.

Premium ticket buyers get a color playbill, a front row seat with a lawn chair, a choice of food up to $10 and a bottle of water as well as an intermission Gannon's ice cream.