This is Shakespeare's earliest and shortest comedy.  It is one of his few plays to follow the convention of all action taking place in one day.  The play is set in Ephesus, a city in Greece at the time (but it looks like Elizabethan England).  Merchants from Syracuse must pay a 1,000 mark fine before doing business in Ephesus and vice verse.  Two sets of twins, one of the two from each city, complicate the plot into extreme mistaken identity.  The mix-ups drive the plot lines but all is resolved in the end. 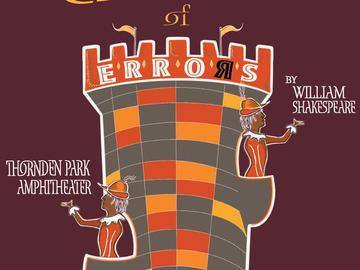 COVID-19 capacity restrictions have been lifted by NYS as of 6-15-21. Unvaccinated audience members must wear a mask until they reach their place in the Amphitheatre. They must also put on their mask whenever they leave their place.